Microsoft Corp. CEO Steve Ballmer unveiled Bing, a new Decision Engine “providing customers with a first step in moving beyond search to help make faster, more informed decisions“. The debut of the company’s new search engine was  in Carlsbad, California at 8:25 AM on May 28th 2009.

Microsoft is calling Bing a Decision Engine, designed to empower people to gain insight and knowledge from the Web, moving more quickly to important decisions. We at DecisionCare also have the same objective of providing help in decision making so that there is less stress in day to day decision making. Our approach is from a different perspective based on scientific principles of Vedic Astrology. This new search engine from Microsoft will undoubtedly contribute to better decision making for all when combined with astrological prognosis. Here, we analyze the future of Bing based on its time of release by Vedic Astrology.

The vedic horoscope with the planetary longitudes at Carlsbad at the moment of release of Bing is shown in the figures. The Ascendant is Gemini, Ascendant Lord Mercury is  with 11th lord Mars in 11th in Aries in Mars’s Moolatrikona house. Moon is in 2nd house in Cancer. These are great Rajyogas (planetary combinations) and Wealth yogas for tremendous success in terms of financial gains. Mercury retrograde suggest some delay though. Venus 5th lord exalted in tenth house in Pisces and Jupiter aspect on Lagna from ninth suggest widespread acceptance of Bing by user community. Moon is in Pushya Nakshatra, with Nakshatra lord Saturn in 3rd indicating of internet business. Present Vimsottari dasha is Sun Antaradasha in Saturn Mahadasha.  As sidereal Saturn moves in Virgo in September 2009, the decision engine will experience rising growth in its usage to give Microsoft finally an edge in this business. 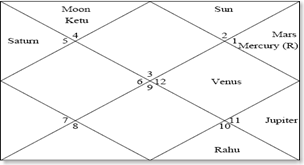 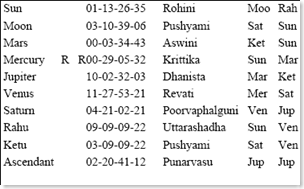