Saturn , Shani or Sani moves into Virgo Sign (Kanya Rashi) on 9 September 2009 that is 09-09-09 according to Vedic Astrology. Effect of this sidereal saturn on individual lives has been discussed in Virgo Saturn Transit Free E-book . On analyzing effect of saturn gochar (transit), Janma nakshatra (Constellation) is very important and Vedic astrology outlines a unique technique of prediction. The twenty-seven nakshatras counted from  the Janma Nakshatra (birth star) are distributed among the various parts (Limbs, Anga)of the physical body of the native and based on the transit nakshatra of saturn, the results are discussed. 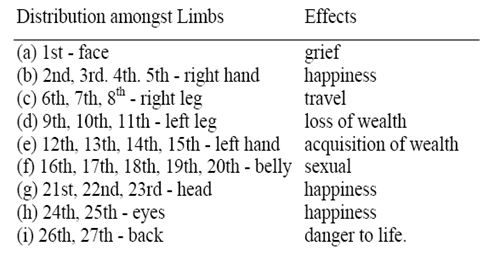 The following table shows the distribution of the 27 nakshatras reckoned from the Janma Nakshatra and the relative effects in the course of the transit of the Saturn. For example, if Saturn is transiting 21st nakshatra counted from Janma Nakshatra, it corresponds to body limb head and denotes happiness.

On 9th September, 2009 when saturn moves  into virgo it will be in Uttaraphalguni nakshatra, which will be the 12th from Ashwini, 11th from  Bharani, 10th from  Krittika, 9th from Rohini, 8th from Mrigshira, 7th from Aridra, 6th from Punarvasu, 5th from Pushya, 4th from  Ashlesha, 3rd from Magha, 2nd from PoorvaPhalguni, 1st from UttaraPhalguni, 27th from  Hasta, 26th from Chitra, 25th from Swati, 24th from Vishakha, 23rd from Anuradha, 22nd from Jyestha, 21st from Mula, 20th from Poorvashadha, 19th from Uttarashadha, 18th from Shravana, 17th from Dhanistha, 16th from Satabhisha, 15th from Poorvabhadrapada, 14th from Uttarabhadrapada, 13th from  Revati. Find your Janma Nakshatra by visiting  decisioncare.org/astrology

The Limb transit result predictions described here must be combined appropriately with other transit predictions discussed in Saturn (Shani) Virgo (Kanya) transit September 2009 Effect and the individual horoscope to predict the effect of this important Shani  (saturn, Sani) transit in kanya (Virgo).