Solar Eclipse of January 15th 2010 will  carry significant influence over the future of Japan. The Eclipse point impacts the Ascendant Lord, Mahadasha Lord and is in opposition to the Ascendant Point as the earlier Total solar eclipse in July 2009. The effect of earlier total eclipse was immediate including the general elections in japan and change of power. We analyze the effect of this Eclipce on future of Japan.

The planetary position at the time of eclipse are shown in the table here. The eclipse point occurs at one degree of Capricorn in Uttarashadha nakshatra with Sun as the lord of the nakshatra. The Post War Constitution of Japan was promulgated at 0.00 hrs on 3 May 1947 in Tokyo. The Vedic horoscope of post War constitution of Japan is shown here. Ascendant is Capricorn three degrees, Ascendant Lord is Saturn is at nine degrees Cancer. Based on Moon position, Saturn is current Mahadasha lord.

The eclipse point of onedegree capricorn within five degree orb of ascendant point and in direct opposition to natal saturn. Saturn is lagna lord and second house lord, the house of bank and savings. The alarming increase of debt to GDP ratio for Japan is indicative of Saturn’s mahadasha effect in addition to saturn’s first phase of sade sati. The present eclipse suggests major changes in Japanese policies especially with 10th lord Venus in close proximity to eclipse point and ascendant. 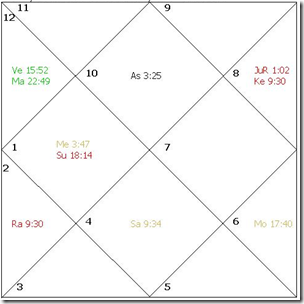 DecisionCare presents below a series of articles pointing to solar eclipse effect on individual zodiac signs.  To analyze the effect of this solar eclipse on your individual horoscope please visit http://decisioncare.org/astrology/ where you can obtain your free Vedic horoscope, your moon sign, solar eclipse day transit on your horoscope.