Solar Eclipse of January 2010 will take place with the planetary positions shown in the table. The Eclipse point is at one degree degree of Capricorn in Sidereal longitude. The Eclipse point in uttarashadha nakshatra ruled by Sun falls on Jupiter in the horoscope of Iranian Islamic Republic Proclamation. Note Jupiter is the sixth and ninth lord located in Lagna Cancer. Note this was the day Shah of Iran left Iran, a significant day in the history of Iran.The Eclipse point also falls within an orb of two degrees on Venus in mundane chart of North Korea. Venus is the tenth and fifth lord located in seventh house. We pray for the best to prevail considering the influence on 5th house lord, the house of intelligence. To analyze the effect of this solar eclipse on your individual horoscope please visit http://decisioncare.org/astrology/ where you can obtain your free Vedic horoscope,your moon sign, solar eclipse day transit on your horoscope.

We have discussed extensively how to judge the influence of eclipse in our earlier blogs and leave the readers to draw own conclusions based on those guidelines. 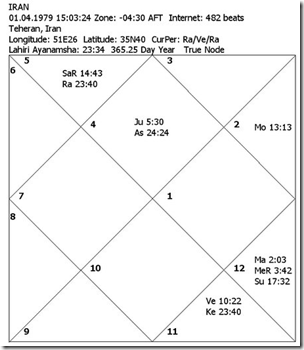 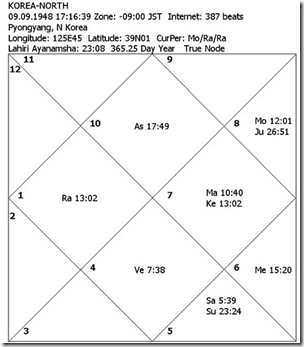