has its eclipse point on five degrees of cancer. The planetary positions at the eclipse point are presented in the table here. The eclipse point coincides with the natal Ketu position in the horoscope of Republic of Sri Lanka (once also known as Ceylon). This coincidence is of tremendous significance for the Republic as we discuss here.

Sri Lanka became independent on 4th February 1948. The horoscope based on independence time is shown here. The inherent vitality of the chart come from placement of ascendant lord Venus in 5th in a friendly place with 9th lord Mercury. Mars 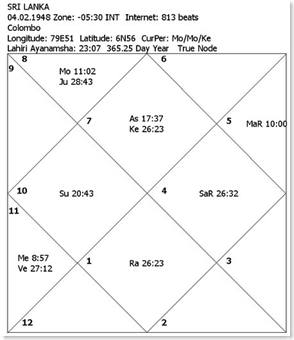 is the 7th lord representing opposition (which in  case of Sri Lanka represents Tamil Minority) aspects the ascendant lord. In addition, Ketu in lagna has contributed to political instability from the time of independence.

As soon as Ketu dasha started, Sri Lanka became a  Democratic Socialist Republic on May 22 1972. The republic chart is shown here. For those interested in eclipse astrology, we wish to point out the occurrence of a  solar eclipse on July 22, 1971 (note the eclipse point is  identical to that of total solar eclipse on July 22, 2009 this year). This period saw declaration of national emergency, country on war footing and even life of Prime Minister was in danger. Many old enough still remember that period. The declaration of Sri lanka as a republic came about a year later when transit Ketu crossed the eclipse point within one degree orb on May 22 1972.

Sun and Saturn together in 10th house of the 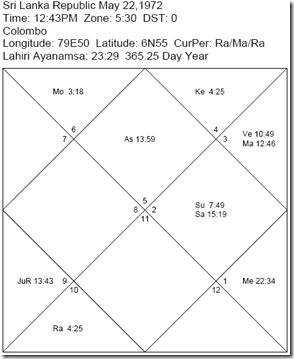 Note the coming months may not be easy ones for Sri Lanka even after apparent demise of LTTE. The Republic may see major structural changes with new balance of power in coming months especially after September 2009.