The planetary positions at the moment of total eclipse is shown in the table.  Eclipse has significant effect when eclipse point is in the rasi or nakshatra of natal planets or near sensitive points in the horoscope. An Eclipse in the same rashi as another planet will affect the fortune of the person indicated by that planet whereas in the same nakshatra will affect the health of the individual indicated by that planet. The effects of an eclipse can be experienced around the time before or after the eclipse. If the luminary is placed before ascendant lord/sun/lord of the house, then the effects arise prior to the eclipse date. 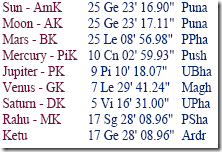 The 5 Eclipse Astrological Influence Essentials are

3. The eclipse influences the matters related to the eclipse point house from the ascendant.

4. The planets in conjunction with or aspecting the eclipse point are eclipse significators .

5. Eclipse point degrees and Individual horoscope planetary longitudes, Rasi and Navamsa Charts should be analyzed together.

We note here the relation of the eclipse point of the total solar eclipse of July 11th, 2010 to sensitive points of horoscopes of many nations.

1. The eclipse point falls on Ketu  in  second house of horoscope of Kyrgyzstan,  See Kyrgyzstan Unrest Astrology The conjunction suggests more trouble ahead.

2.  The eclipse point is in exact opposition to natal Mercury in 4th house in the chart of Indian Republic Day on January 26th 1950.. See Indian Republic Astrology 2010 July Solar Eclipse

3.   The eclipse point is in conjunction with natal moon position in the chart of independence of Pakistan.   See Total solar Eclipse and Pakistan 2010 Astrology

4.  The eclipse point is in opposition to natal moon position in the chart of independence of Morocco.

5. The eclipse point is in opposition to Venus in 6th house in SAMVA USA chart  based on the event when Maryland became the 13th and final state to approve the ratification of the Articles of Confederation on February 2, 1781 in Annapolis, Maryland making USA  effectively into being as a Perpetual Union.

6. The eclipse point is in conjunction with natal Venus and saturn in 10th house of Indonesia.

These free tools are:

It is a set of astrological tools that we believe you will love and learn to use more and more to feel the power of predictive astrology. Please login at our member site http://decisioncare.org/astrology/