Solar Eclipse January 2009 will occur on 26th January 2009 with conjunction of Sun and Moon at 7:55:20 GMT near Rahu (the north lunar node). It is a partial social eclipse visible in     The Sun, Moon and Rahu (North Node) conjoin in Capricorn in Sravana Nakshatra and Ketu (South Node) will be  in Cancer . The partial eclipse will be seen within the much larger path of the Moon’s penumbral shadow, which includes the southern third of Africa, Madagascar, Australia except Tasmania, southeast India, Southeast Asia and Indonesia. 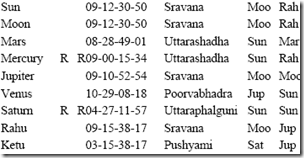 The planetary positions at the time of eclipse are shown in the attached table.  The eclipse is along capricorn-cancer axis. Note the proximity of debilitated Jupiter to the eclipse point which is in the sixth from Saturn,  the lord of zodiac sign Capricorn. The Capricorn and Cancer born will experience major changes in their lives.

It is popularly believed that Eclipse always portend negative events. However, that is not true. Eclipse points are in essence “energy junctions”. Whether the energy is manifested positively or negatively depends on the position of the ascendant and other planets with reference to the eclipse point. For example, for Gemini and Sagittarius born, the eclipse is in 2nd-8th house axis; for some it is in 22nd Drekkana and 64th Navamsa, indicating health and financial, family life concerns.

We advise all, especially, Capricorn, Cancer, Gemini and Sagittarius born to get their horoscopes analyzed for the influence of the 2009 January eclipse in their lives.