The Total solar eclipse on Wednesday, July 22, 2009 will be of 1.080 magnitude visible from a narrow corridor through northern India, eastern Nepal, northern Bangladesh, Bhutan, northern tip of Myanmar, central China and the Pacific Ocean, including Ryukyu Islands, Marshall Islands and Kiribati. Eclipce Totality will be visible in many cities from India, like Surat, Indore, Bhopal;, Varanasi, Patna etc. Other Cities are Thimphu in Bhutan and Chengdu, Chongqing, Wuhan, Hangzhou, Shanghai from China. Most of South East Asia and north-eastern Oceania will view a partial eclipce.

This solar eclipse is the longest total solar eclipse in the twenty-first century. The next one this magnitude will be in June 13, 2132. Totality will last for up to 6 minutes and 39 seconds, with the maximum eclipse occurring at 08:05:21 IST about 100 km south of the Bonin Islands, southeast of Japan.

Time of totality varies from place to place depending on which part of the shadow the city is falling. Since the eclipse is going to be in the month of July, it is monsoon period for the India, so it is quite possible that majority of the cities will have the cloud coverage. From the point of view of carrying scientific studies through the eclipse, the prediction for the weather is very essential. The proposed best location in the totality could be any place in the north-eastern part of India especially in Bihar. It is because, according to the weather predictions maps from meteorology department shows the less cloud coverage in those region. But, to be speaking frankly, these situations may vary depending on the local circumstances.

1. First Contact. When the edge of moon and edge of sun is observed to be touching each other when viewed from earth.

2. Second Contact. When the Moon completely blocks the Sun and totality of eclipse begins. The total phase of a solar eclipse rarely lasts more than several minutes. Nevertheless, it is an awe-inspiring spectacle. The sky takes on an eerie twilight as the Sun’s bright face is replaced by the black disk of the Moon. Surrounding the Moon is a beautiful gossamer halo. This is the Sun’s spectacular solar corona; a super heated plasma two million degrees in temperature. The corona can only be seen during the few brief minutes of totality. To witness such an event is a singularly memorable experience which cannot be conveyed adequately through words or photographs.

3. Third Contact. When the Moon’s edge is starting to leave the disk and one can again see the spectacular diamond ring structure.

4. Fourth Contact. When the Moon is completely out of Sun and no eclipse is visible at all.

The Four Contact timings of the Solar Eclipse are shown in the table below for major Cities of India. Red color indicates the cities falling in the path of totality.

NEVER LOOK AT THE SUN WITH NAKED EYE. SUN LIGHT MAY DAMMAGE YOUR EYE PERMANENTLY. The best way to look at the Sun is through the proper filters named SOLAR FILTERS. This filter can reduce the sunlight by more than 1000 times than otherwise. Make a “pinhole camera” to view a projected image of the Sun.

A simple pinhole cameras can be made out of two thin but stiff pieces of white cardboard. Punch a small clean pinhole in one piece of aluminum foil stuck on to the center of a cardboard and let the sunlight fall through that hole onto the second piece of cardboard, which serves as a screen, held below it. An inverted image of the Sun is formed. To make the image larger, move the screen farther from the pinhole. To make the image brighter, move the screen closer to the pinhole. Do not make the pinhole wide or you will only have a shaft of sunlight rather than an image of the crescent Sun. Remember, this instrument is used with your back to the Sun. The sunlight passes over your shoulder, through the pinhole, and forms an image on the cardboard screen beneath it. Do not look through the pinhole at the Sun. 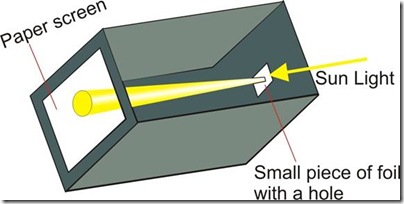