Zardari, Pakistan President, signed 18th Amendment on April 19th, 2010. It is expected to the strengthening of democratic institutions and the federation and autonomy for the provinces, as Gilani and Nawaz Sharif proclaimed.  Slain PPP leader Benazir Bhutto dream restored?  What does Vedic Astrology indicate?

The amendment signing horoscope is shown here.  Retrograde 6th lord Saturn in Ascendant (Lagna), Lagna Lord Mercury in eighth, Moon with Ketu in Mrigasira Nakshatra owned by Mars and aspected by Saturn is not indicative of a positive future. Moon is also with Mars in Navamsa in Nakshatra Sandhi. Prepondernce of Martian influence, given the history of Pakistan Army’s past, is not a good sign for the democratic forces. 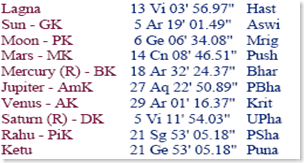 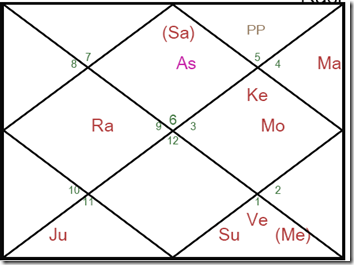