Shashi Tharoor submitted his resignation. Vedic astology can provide a clue. From United Nations to minister of state for external affairs of India and then this sudden disgrace. Tharoor was born on 9th March 1956 in London, time of birth is not kn 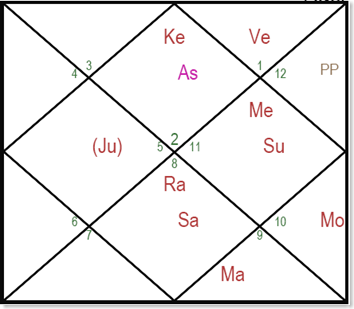 own publicly. The horoscope with sun in Midheaven is shown here.  Moon is in Sravana nakshatra suggesting Saturn mahadasha currently. Position of saturn and rahu in 7th indicative of multiple divorces and marriages. Moon aspected by Saturn in the second house to Mars. The present difficulties come from Mars antara which is in eighth house affecting his 2nd house (house of speech) and financial involvement. Jupiter’s strong  presence influencing Mars, venus, Sun, mercury has been the cause of his rise. Will he be back in public life?

Unlikely, because of Rahu/Saturn combination in 7th and the upcoming dashas of the same.