Google Inc. was born ten years ago on September 7th, 1998 with not so certain future. Today it is a ten year old young company with a dictionary meaning name, nearly 20,000 employees, and a $150 billion market value constantly redefining media, marketing and technology. What about the next ten years? 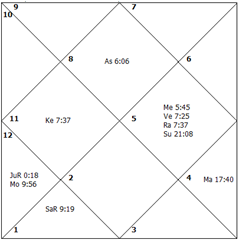 Needless to say, there are many auspicious planetary combinations ( Raj yoga ) present in the horoscope, as per Vedic Astrology. The most prominent one being presence of Jupiter with Moon. It has been running Saturn Mahadasha since its inception which will be over soon. This has been time of hard work, spectacular growth and excellent return for stock holders. The recent release of Chrome promises the same results in the future.

Mercury Mahadasha, that runs for seventeen years, will be beginning any time which will bring about a change in its focus. The later part of 2009, 2010 and 2011, somewhat difficult, will be major years of transition to new products and new focus. Its founders, Larry Page and Sergey Brin are also undergoing Mahadasha changes at the same time. (We will be discussing their Vedic horoscopes soon in our next blog). This means major changes in the company management and directions.

Mahadasha lord Mercury is in close conjunction with Rahu and Venus in the birthchart, representing new revolutionary breakthrough in communications technology. In addition, Mercury, during these seventeen years, will also move Google in the direction of establishing itself as a large financial investment house. Though, this is likely to occur no earlier than 2013.

Overall next ten years in Mercury Mahadasha will also be continuation of further spectacular growth albeit in different fields. We see Google, both as a major financial house and a technological giant.