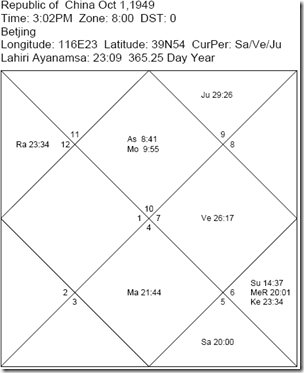 The current eclipse will influence China significantly as per Vedic Astrology. The Vedic Horoscope of People’s Republic of China dated October 1st 1949 is shown here.

The eclipse point of the solar eclipse which is five degree cancer falls within a orb of three-four degrees in opposition to natal Moon of China as well as the Ascendant. Moon is seventh lord located in Ascendant representing partners in business (perhaps representing USA, the main one). Ascendant represents China itself. This eclipse point opposition implies beginning of significant changes in relationship with USA as well as China’s internal policies.

The subsequent conjunction of eclipse point of Lunar Eclipse of August 6th with Natal Mars of China is not very welcome. It implies possible involvement in violent or military  activity perhaps for territorial issues. The possible time period may be within next few months most likely by October 2009 when Mars transits over this sensitive eclipse point.