Indian Astrology will shed light on upcoming Indian Lok Sabha Elections in April–May 2009. DecisionCare aims to encourage Voters to use astrological predictions about the candidates as they go to the polls, as has been the recent trend in US elections. DecisionCare promises free horoscope analysis for election candidates as long as the birth details (date, time and birth place) come from the candidates directly. As a prelude, we present the horoscopes of the major political parties in next few blogs.

Congress led alliance is the ruling party, with its leaders Prime Minister, Manmohan Singh, Sonia Gandhi, Rahul Gandhi, Priyanka Gandhi, Pranab Mukherji and others.  Congress-I  came into existence in Delhi on  Mon Jan 2, 1978 midday. The corresponding planetary positions are shown here.  A few things to be noted here, more detailed analysis will followin later blogs. Congress-I has Meena Lagna (Pisces Ascendant), Virgo (Kanya) Moon Rashi. It is currently undergoing Shani Sade Sati  and Shani’s entry in Virgo will bring Saturn in September 2009 will bring it to the middle phase. Vimsottari mahadasha based on Savana year (360 days) shows it is in Jupiter antardasha in Jupiter mahadasha since around mid 2008-september 2008 (note the timing near Nuclear deal approval). This new Jupiter mahadasha is the dasha of lagna and 10th lord, a time of great change for Congress. 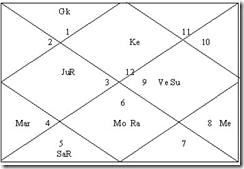