Philippines Presidential Election is on May 10, 2010. Each Presidential candidate biographical sketch is given here. We have their birth dates but no birth time to make accurate Vedic Horoscope. We will try to analyze the election prospect based on the available data. We invite the candidates or their representatives to provide us birth data for accurate analysis. 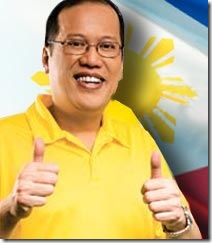 Nationality: Filipino
Girlfriend: Councilor Shalani “Lani” Soledad
Children: None
Religion: Roman Catholic
Hometown: Manila Philippines
Profession: Politician
Graduate: Economics
School: Ateneo de Manila University
Food: Chinese Foods
Hobbies: Shooting and Billiards
Political Party: Liberal Party
Political Achievements:
1. Congressman of the 2nd District of Tarlac from 1998 to 2007
2. In 2004, he was stripped of his prestigious post as Deputy House Speaker for Luzon after he joined leaders of the Liberal Party (LP) in calling for the resignation of President Gloria Macapagal-Arroyo at the height of the “Hello Garci” scandal.
3. In May 2007, he ran for Senator and won, placing 6th in the national elections.
4. As a Senator in the 14th Congress, he chairs the Senate Committee on Local Government.
5. In the Liberal Party, Senator Aquino held various positions such as Secretary General and Vice Chairman. He is now Party’s Executive Vice President. 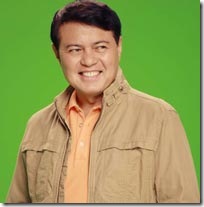 Father: Manuel Montalban Villar, Sr. (government employee, hailed from Cabatuan, Iloilo)
Mother: Curita Bamba ( seafood dealer, came from Pampanga and Bataan)
Siblings: 9 (Manny Villar is the second child)
Nationality: Filipino
Spouse: Cynthia A. Villar (representative of the lone congressional district of Las Piñas)
Children: He has two sons (Paolo and Mark) and a daughter (Camille).
Religion: Roman Catholic
Hometown: Moriones, Tondo, Manila
Profession: Successful Filipino Businessman and Politician
Graduate: undergraduate and master’s degree in business administration and accountancy
School: working student of University of the Philippines
Political Party: NP
Political Achievements:
1. former Congressman from Las Pinas and a former Senate President
2. President of the Nacionalista Party and a member of the Senate of the Philippines
3. Speaker of the House of Representatives from 1998 to 2000
4. presided over the impeachment of President Joseph Estrada—as well as President of the Senate from 2006 to 2008
5. Manuel Manny Villar assumed the Senate presidency at the beginning of the Third Regular Session of the 13th Congress, as part of a power-sharing agreement with his predecessor Sen. Franklin Drilon. On November 17, 2008, resigned due to lack of support in the Senate.
6. recognized as the richest legislator in Philippine history where he was consistently the richest congressman from 1992 to 2001 and richest senator from 2001 until 2008 with a net worth of P1.04 billion
7. On the Forbes Magazine released October 2007, its list of “The Philippines’ 40 Richest”, Manuel Manny Villar is ranked 5th and the year’s biggest gainer 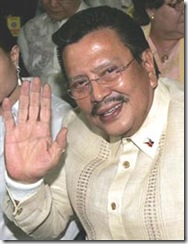 Birth date: April 19, 1937
Birth Name: Jose Marcelo Ejercito
Father: Engr. Emilio Ejercito
Mother: Maria Marcelo
Siblings: 10 (Erap was the 8th child)
Nationality: Filipino
Spouse: former Senator Dr. Luisa Pimentel
Children: Jinggoy, who is now a senator of the realm, Jacqueline and Jude
Religion: Roman Catholic
Hometown: Tondo Manila and San Juan
Profession: Actor, Politician
Political Party: Nacionalista (1986-1992), NPC (1992-1998), Partido ng Masang Pilipino (1998-present)
Schools: Ateneo de Manila University (expelled in his sophomore year of high school for unruly behavior), Mapua institute of Technology (dropped out from studies altogether two years later)
Political Achievements:
1. 13th President of the Philippines, serving from 1998 until his ouster in the 2001 EDSA Revolution (June 30, 1998 – January 20, 2001)
2. Estrada gained popularity as a film actor, playing the lead role in over 100 films in an acting career spanning 33 years.
3. Mayor of San Juan for 16 years (1969-1986)
4. Senator for one term (1987-1992)
5. 11th Vice President of the Philippines under the administration of President Fidel Ramos (June 30, 1992 – June 30, 1998).
6. In 1972, he was selected as one of the Ten Outstanding Young Men (TOYM) in Public Administration by the Philippine Jaycees
7. He was also voted Outstanding Mayor and foremost Nationalist by the Inter-Provincial Information Service in 1971 and awarded the coveted title, “Most Outstanding Metro Manila Mayor,” the following year by the Philippine Princeton Poll.
8. In 1989, the Free Press cited him as one of the Three Outstanding Senators of the Year
9. Presidential Adviser on Crime Prevention and Law 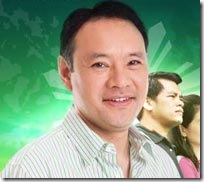 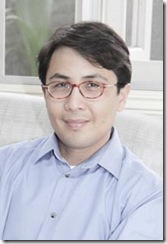 Birth date: February 14, 1970
Birth Name: John Carlos “JC” G. de los Reyes
Nationality: Filipino
Spouse: Dunia Valenzuela
Children: Gabriel, Santiago, Barbara
Religion: Roman Catholic
Hometown: Olongapo City
Profession: Councilor
Political Party: Ang Kapatiran
Schools: Ateneo de Manila University (elementary), De la Salle (High School), He finished his B.A. in Theology from the Franciscan University of Steubenville, reputed to be one of the most orthodox Catholic Universities in America. In 1999 he finished his post-graduate studies in Public Administration from the University of the Philippines and proceeded to study law in Saint Louis University, Baguio City, finishing his degree in 2005.
Political Achievements:
1. In 1995, he was elected as the city councilor of Olongapo City. During his term, he focused on the poor, the youth and cooperatives.
2. In the 2007 elections, among 27 local and national candidates, he was the lone winner of the Ang Kapatiran Party, placing second among ten slots for the Olongapo City Council. This was achieved despite a decade absent from local politics.
3. His free legal assistance program under an informal project named JUSTICE CRUSADE has been extensively successful among his constituents. He is presently prioritizing the institutionalization of the Barangay Human Rights Action Centers, the office mandated by law for the protection and prevention of human rights violations in the barangay.
4. As councilor, de los Reyes has spoken out and campaigned against illegal drugs, rampant violations of worker’s rights at Hanjin, Subic Bay and has campaigned against illegal fish cages in the area. He has also led protests against the proposed coal power plant and has been outspoken in criticizing government’s plan to open more casinos in Subic.
5. The boldest statement he has made for good governance is the filing of numerous cases before the Ombudsman against high ranking government officials where he himself is complainant. This is in line with his political policy of alleviating the people’s suffering by addressing the problem of expensive and increasing costs of basic needs like water, electricity, medicines, health care, etc., and insuring that these basic services are kept free and far from graft and corruption. 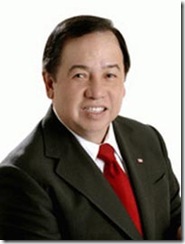 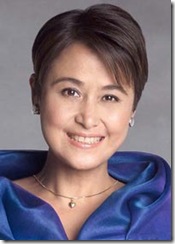 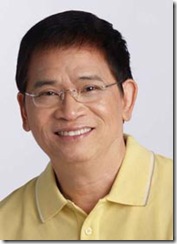