Komorowski, Bronislaw is the new President of Poland. He defeated Polish ex-premier Jaroslaw Kaczynski in a presidential vote forced by his identical twin’s air-crash death. Here we analyze Komorowski’s horoscope based on Indian Vedic astrology principles.

Bronisław Maria Komorowski became the Acting President of Poland when Lech Kaczyński, the President of Poland, died in a plane crash on 10 April 2010, presidential powers and duties automatically transferred to Komorowski because he was Marshal of the Sejm (Speaker of Parliament).  Komorowski was Polish Minister of National Defence from 2000 to 2001. From 2005 to 2007 he was a vice-marshal of the Sejm – the lower chamber of the Polish parliament. On 5 November 2007 he was elected to and took the office of the Sejm Marshal. Bronisław  Komorowski was born on 4th June 1952 in Oborniki Śląskie. Komorowski is the son of Count Zygmunt Leon Komorowski (1924–1993) and Jadwiga Komorowska (née Szalkowska) (1921–). He has been married to Anna Dembowska since 1977. He has five c 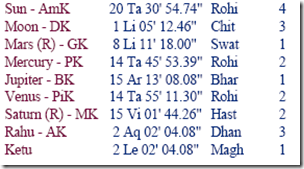 Since we do not have birth time of Komorowski, we examine the midday planetary position according to Vedic astrology. Sun, Mercury and Venus occupy 10th house with Sun as the lagna lord with Venus 10th and 3rd lord and Mercury 2nd and 11th lord. Moon in chitra third pada indicates end of Saturn mahadasha in 2007. Beginning of Mercury mahadasha coincided with his election to the office of Sejm Marshal. Continuing mahadasha of Mercury with present antardasha of venus and next antardasha of Sun is going to take him to new heights as a national leader. He is however running saturn sade sati at the same time indicating a period of new challenges too.

These free tools are:

It is a set of astrological tools that we believe you will love and learn to use more and more to feel the power of predictive astrology. Please login at our member site http://decisioncare.org/astrology/