Kgalema Motlanthe is sworn in as President of South Africa on September 25th, 2008. Kgalema Motlanthe replaces Thabo Mbeki, who quit after the African National Congress (ANC) withdrew support. He will serve as president until April next year when South Africa holds presidential elections. Is he there only for a short time? We seek an answer from Indian Astrology.

Kgalema Motlanthe was born on 19th July 1949. His birth time is not known. We have the mid 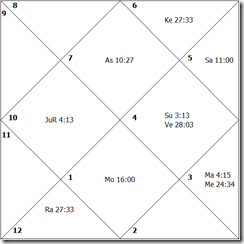 day Indian Horoscope of on this birth date. Based on the moon position that day, he is currently running Jupiter Mahadasha. Janma Rasi lord Mars is in the 3rd house with 3rd Lord Mercury aspected by 10th house aspect of Saturn. Presence of Rahu in 12th from Moon and Saturn in 5th from Moon indicates imprisonment during Rahu period. Jupiter is in debilitation in 10th house and suggests there must be Neechbhanga rajyoga in his horoscope to take him to this position. Without the lagna, the horoscope of midday is not very informative. 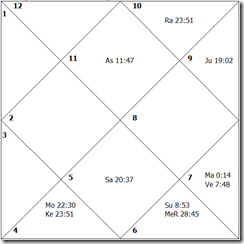 South Africa is shown here. This horoscope gives us an indication of events his Presidency will face. Aquarius lagna is rising with Moon in Ashlesha nakshatra second pada. Lagna lord Saturn is in 7th house, Jupiter, the eleventh lord in eleventh house, the house of fulfillment and 9th lord Venus with 10th lord, Mars in the 9th house, the house of luck.It is an excellent Rajyoga combination which suggests Motlanthe will be there in power for much longer than just less thanone year time period as many suggest. Perhaps he will also have a big win in the upcoming parliamentary elections. Presence of two planets in eighth house and two in sixth house suggest that this long term stability will however be marred by considerable short term survival problems, undesirable sudden developments and inside party struggles.