Khaleda Zia was freed after one year detention at 11.35am on September 11th, 2008. She was the first woman Prime Minister of Bangladesh from 1991 to 1996, then again from 2001 to 2006. She is the widow of President of Bangladesh Ziaur Rahman, and leader of his old party, the Bangladesh Nationalist party.

She was born on 15th August 1945 in Dinajpur District, Bengal. Her birthtime is publicly not ava 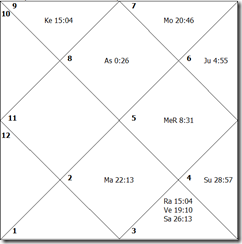 ilable. Until the assassination of her husband in an abortive military coup in Chittagong on 30th May 1981, Khaleda Zia had taken little interest in either politics or public life. But soon thereafter her active political life started. On August 10th, 1984, the party elected her the chairperson. The midday planetary poistions in the sky on her birthdate is shown here according to Indian Astrology.

Based on publicly available timing of events in her life, her husband was assasinated in Saturn Mahadasha, Rahu Antaradasha of Vimshottari Mahadasha system. Transit Jupiter and Saturn were in conjunction with natal Jupiter on this unfortunate date. Her active role in politics started beginning Mercury Mahadasha. Her detention period was possibly in the Keu mahadasha/Saturn antardasha. Accordingly, her Ketu Mahadasha will end and Venus Mahadasha will start next year at the same time as the beginning of her Shani Sade Sati. Will she have an active political career henceforth?

The vedic horoscope at the moment of her release from detention has Scorpio lagna with a conjunction of Mars, the lagna lord with Mercury the eleventh house lord and Venus, the seventh house lord, all in posited the 11th house, the house of f 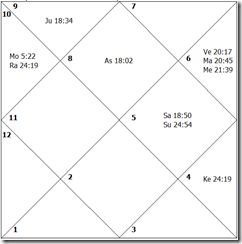 ulfillment. The tenth house lord Sun in the 10th with janma rasi lord, Saturn, promises political rise back to power. But Saturn is also expected to bring about a sudden fall from power specially during the period of onset of Shani Sade Sati. So it is difficult prediction without her horoscope.

Begum Khaleda Zia is expected to play a major role in the scheduled general elections in Bangladesh in December 2008.