Trig Palin was born to Sarah Palin, the current Governor of Alaska and the Republican Vice-Presidential choice of John McCain against Obama-Biden, on 18th April 2008 at 6:30 AM (AKDT) in Anchorage, Alaska. Trig, though apparently afflicted with Down Syndrome, has caught national attention at the age of less than six months. The only available information, we have about mother Palin is that she was born in Sandpoint, Idaho on February 11, 1964. Her birth time is not known publicly.We analyze the Vedic Horoscope of Trig to throw light on mother Palin’s horoscope and fix her birth ascendant (lagna) based on publicly available details of events.

Trig’s Vedic horoscope is shown here. His ascendant (lagna) is Pisces with Venus exalted in it. Moon the fifth lord is in the seventh house in Hasta nakshatra. Saturn with Ketu in sixth house and twelfth from Moon 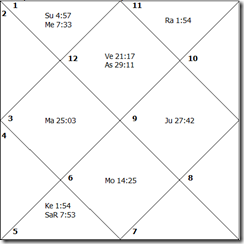 is the cause of Down Syndrome, according to Indian Astrology Yogas. The presence of 9th and 2nd lord Mars in fourth house, aspected by benefic Jupiter (also lagna and 10th lord) from 10th house is a Rajyoga in Vedic Astrology and confirms the high political position of mother.

Jupiter and Mars, both are highly beneficial in Trig’s horoscope. Jupiter and Mars are also very strong in midday horoscope of Sarah Palin. She is running Jupiter Mahadasha and Jupiter has been always in excellent transit position with respect to her birth planets on her significant life events; marriage date, Aug. 29th 1988, on the birth date of her first child, April 20th 1989 and on her Vice-Presidential candidate selection date, Aug. 29th 2008. We believe her vedic horoscope lagna is Pisces based on her birth time rectification. We will discuss Sarah Palin’s Vedic horoscope in an upcoming post.