Obama, Barrack Hussein, the Democratic Presidential candidate is born on 4th August 1961 at 7:24 PM in Honolulu, Hawaii according to the birth certificate released in Obama website as shown in the displayed image here. Our earlier blog on Vice-Presidential candidate selection timing suggested an advantage for Obama-Biden ticket over McCain-Palin. Here we discuss Obama’s natal Vedic horoscope (birth chart) based on this time, shown along with the planetary positions. 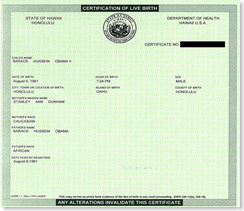 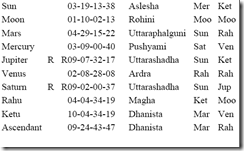 Obama’s birth is in Rohini nakshatra with Moon dasha at birth. The ascendant is Capricorn with lagna at 24 deg. 44 min. He began Jupiter mahadasha in Jan. 1996 and is currently running Mars antardasha in Jupiter mahadasha which started on 19th July 2008 and will last till 20th June 2009. Earlier Moon antardasha in Jupiter mahadasha gave him his victory over formidable Hillary Clinton, thanks to his exalted Moon and Jupiter in lagna with Neechbhanga rajyoga in association with Saturn. Mars, the lord of eighth and fourth, is in eighth from lagna. Mars is the seventh and twelfth lord from natal Moon situated in fourth house from it. Transit Saturn is in Leo and will be getting closer his natal Mars as the election gets closer.