Palin, Sarah was selected by McCain as Vice-Presidential mate against Obama-Biden on 29th August. The timing of Vice-presidential selection was analyzed in depth in earlier blog. We also discussed the Vedic horoscope based on exact birth time of Trig palin, son of Governor Palin and inferred that the ascendant of Governor Palin is Pisces. Here we present Sarah Palin’s horoscope based on birth rectification.

The only available information, we have about Sarah Palin is that she was born in Sandpoint, Idaho on February 11, 1964. Her birth time is not known publicly. Palin is born in Dhanishtha nakshatra and we believe her lagna is Pisces. Accordingly, she is currently runni 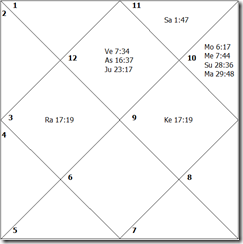 ng Venus Antardasha in Jupiter Mahadasha. Jupiter is in lagna with Venus exalted. That explains her Miss Alaska attempt and dramatic rise to power in Alaska in a short time and then to national scene. Mars the Yogakaraka for Pisces lagna in 11th exalted with Moon, Mercury and Sun bestows an active family life and outdoor life. Saturn is transiting Ashtama Shani (eighth house from natal moon). As we noted in our earlier blogs, Jupiter and Mars are also very strong in the horoscope of Sarah Palin. Jupiter has been always in excellent transit position with respect to her birth planets on her significant life events; marriage date, Aug. 29th 1988, on the birth date of her first child, April 20th 1989 and on her Vice-Presidential candidate selection date, Aug. 29th 2008. Jupiter mahadasha will be very eventful in her life in spite of the present election outcome.