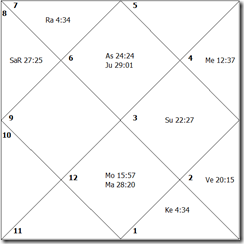 is about to become the next Prime Minister of Israel. She was born in July 8th, 1958 in Tel Aviv. Her birth time is not publicly available. Here is the vedic horoscope as per Indian Astrology at midday on her birth date.
She is born in Uttara Bhadrapada nakshatra and most likely running Moon Mahadasha currently. Moon is in Pisces with Mars, the karaka for Pisces with direct aspect from Jupiter. Venus is in Taurus in his own house aspected by Jupiter. These benefic planets give her a long political career and make her an excellent negotiator. She is correctly described as the most powerful woman in Israel. With Moon and Mars well-placed, we expect Tzipi Livni to have a successful Premiership in a stable government, the equally capable woman Prime-minister of Israel thirty years after Golda Meir. According to our birth rectification, her lagna (ascendant) may be Pisces.