Sri Lanka Presidential elections will be held on January 26th, 2010. Mahinda Rajapaksa and Sarath Fonseka are two major candidates. Fonseka birthdate is on December 18, 1950  and  Rajapaksa birthdate is on 18 November 1945. In the absence of their birth time and horoscope, we examine Sri Lankan independence and Republic chart and their birth dates to get a look at possible election results.

On 26th January, 2010 at midday the planetary positions in Colombo,  Sri Lanka is shown in the table

. We have also given here the horoscopes of  Sri Lanka independence and Republic day. We observe transit Jupiter on election day close to independence chart Mercury.  Transit Jupiter and transit saturn are  also at close proximity to natal Jupiter  and natal saturn on birthdate of Fonseka. January 15th 2010 solar eclipse point was on one degree Capricorn close to Rahu position in Republic horoscope. Rajapaksa is born in Bharani nakshatra and Fonseka Ashwini nakshatra. Their current running Vimshottari mahadasha in addition suggests that Fonseka will have a difficult victory ahead. 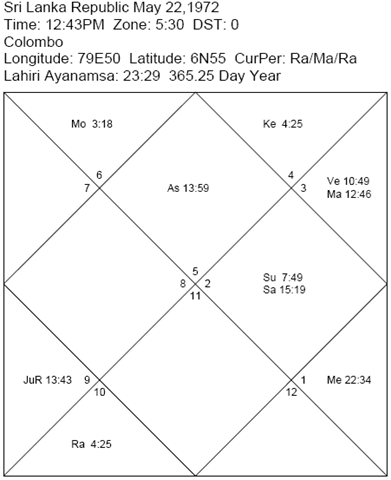 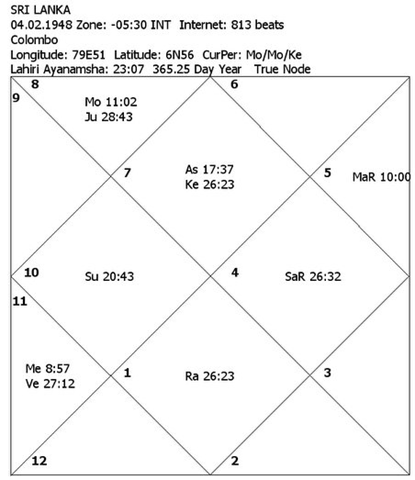