Total Solar Eclipse of July 22, 2009 will be visible over Northern India for the longest duration in this century. The Total solar eclipse will be visible in India from 8:05 AM IST on Wednesday July 22, 2009 (Starts: 6:23 AM, Maximum: 8:05 AM, End: 9:47 AM). Its detailed path over India is shown in our earlier blog on Surya Grahan. This major total solar eclipse, coming within months of nationwide political elections and a stable ministry formation in the center, will have tremendous influence as the Vedic Horoscope of the eclipse moment indicates. 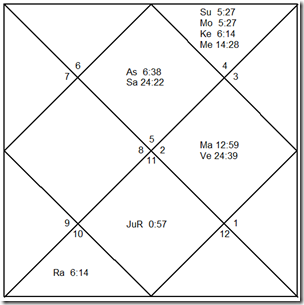 in New Delhi is shown here. The rising Lagna is Leo with the eclipse point in the 12th house. Saturn the lord of 6th and the 7th is in Lagna with direct aspect from a retrograde Jupiter located in 7th house. Venus the 10th lord is with 9th lord  Mars is located in 10th house. This is an excellent rajayoga, indicating ultimate rise to power for India in spite of the multitude of worries due to 12th house location of eclipse point.

The cause of worries can be easily understood once we analyze the independence chart of India shown in the next figure. This is the Vedic Horoscope of Indian independence at Delhi on midnight Aug14th-Aug. 15th 1947. The eclipse point falls on natal Moon of India within an orb of two degrees. Moon is the third house lord in Indian Chart signifying neighbors and worries from neighbors. This

1) coincidence of eclipse point with natal moon in conjunction with 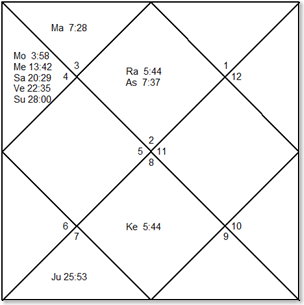 3) Transit of Mars on the eclipse point in Oct. 2nd week of 2009  indicates events of great concern for India from neighbors.

However, the Venus Mars conjunction in the rising horoscope at the time of eclipse suggests an emergence of a strong powerful India after the turmoil is over.