Britney Spears, Pop music star,  will be in Kerala on New Year Eve, 2010 in a luxury boat. After her holidays, Spears will shoot for her new album in various locations in Kerala. The Kathakali dance and a herd of temple elephants are expected to be part of her new album.  Britney Spears was born on December 2, 1981 at 1:30 AM in Mahon, Mississsippi (Astrodata Bank). We analyze her Vedic Chart here. 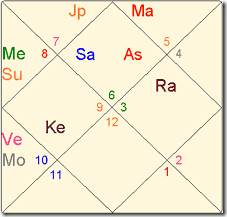 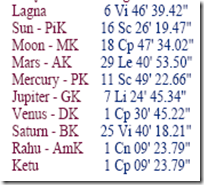 The Vedic horoscope  is shown here.   Venus is with Moon in fifth house. Venus is vargottama and is the lord of 10th house from Moon. This Moon-Venus  combination is key to her success in the music world. Born in Sravana Nakshatra, she is beginning Jupiter Mahadasa this year. Her visit to Kerala may be a sign of changes that Guru mahadasa brings.