Circadian Rhythm is an approximate daily periodicity, a roughly-24-hour cycle in the biochemical, physiological or behavioral processes of living beings. “During the past 50 years, converging evidence reveals that the fundamental properties of the human circadian system are shared in common with those of other organisms. Concurrent data from multiple physiological rhythms in humans revealed that under some conditions, rhythms oscillated at different periods within the same individuals and led to the conclusion 30 years ago that the human circadian system was composed of multiple oscillators organized hierarchically; this inference has recently been confirmed using molecular techniques in species ranging from unicellular marine organisms to mammals.”, notes a recent study from Harvard Medical School (2008).

The circadian patterns typical of someone who rises early in morning, eats lunch around noon, and sleeps at night (10 p.m.) is shown in the diagram below (taken from wikipedia). 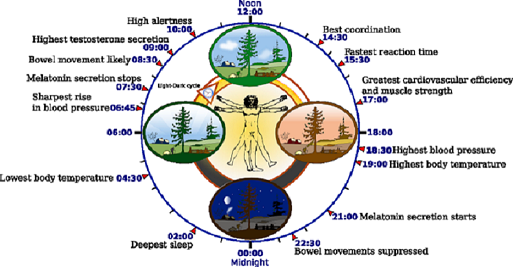 Recognition of universal presence of hierarchical mutiple oscillators in “all species ranging from unicellular marine organisms to mammals” by Harvard research group is noteworthy. Where does this hierarchy emanate from? A question deeply linked to the hierarchy of time scales (connections to solar and perhaps lunar cycles are well accepted in quantitative circles).

For those of us who are well-versed with planetary cycles of Vedic astrology, it doesn’t come as a news, though a quantitative link to synodic periods of all planets remains to be established yet. It is well-known that differing time scales of planets, from fast moving moon to slow moving saturn, pack up a rhythm in an uniquely hierarchical way (dasas and transits on natal planets) for every individual constituting his/her Personalized-Astro-Alert (PAL).

While we work towards understanding the material basis of these multiple rhythms via dilligent research, we must learn to utilize the well-known principles of Vedic astrology to improve human lives.