Rajeev Motwani, 47, the Stanford University computer science professor who mentored Google co-founders when they were graduate students, died  at his Atherton home. Motwani was apparently found drowned Friday morning 5th June in a backyard swimming pool at his home. Friends speculated that Motwani may have slipped and fallen in the pool. Paramedics pronounced him dead at the scene at 12:28 p.m. He left behind his wife, Asha Jadeja, and daughters Naitri and Anya. He contributed to growth of many  startups including Google, whose co-founder Sergey Brin mourns him in his blog. Noting his unsusual death, we try to analyze his death by Vedic Astrology.

Born March 26, 1962, in Jammu, India, Motwani grew up in New Delhi, earned a computer science degree from the Indian Institute of Technology, Kanpur in 1983, and his doctorate from 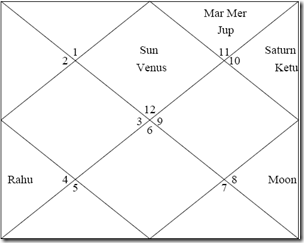 the University of California-Berkeley in 1988. The birth information is obtained from Internet and is assumed to be correct. In the absence of his birth time, we cannot calculate the lagna exactly.

We take the Vedic horoscope at the sunrise. The janma nakshatra is Anuradha that corresponds to his beginning of Ketu mahadasha in 1982-1983 when he graduated from Kanpur. Seven years of Ketu was over in 1989-90. Then exalted Venus running from 1989 to 2009. Sun mahadasha has just started. Sun is in Pisces a watery sign. It is the 6th lord from Pisces. Venus is the 8th lord from Pisces. Both (significator of accident and death) posited in a watery sign Pisces aspected by Saturn suggest death by drowning at the onset of Sun Mahadasha.

This is a highly instructive example of Vedic Astrology. We convey our heartfelt sympathy to the bereaved family.