Prachanda, Chairman of the Communist Party of Nepal–Maoists (CPN-M), said on May 30th 2009 that India was out to restore monarchy in Nepal. “The recent visit of former King Gyanendra to India was not without any motive,” he said. “I have information that as per the agreement, Gyanendra will abdicate soon after his restoration in favor of his grandson Hridayendra”. This statement comes in the heels of our recent forecast based on Vedic Astrology. In our earlier blog, Vedic Astrology, Nepal Republic Fate and Royal Family ,  we suggested that based on the Vedic Horoscope of Nepal Republic, it is likely that “return of some royal family member as monarch may not be ruled out”. Here we analyze the horoscope of Prince Hridayendra.

Prince Hridayendra was born at 12:49 p.m. on 30 July 2002 in the Narayanhity Royal Palace in Kathmandu to Crown Prince Paras and Crown Princess Himani. He is the grandson of Gyanendra. His Vedic horoscope is shown in the figures here. The ascendant lord Venus in 11th house, four planets Sun, Mercury, Mars and Jupiter all in 10th house are indicative of an active personality. Jupiter is exalted, Mars has Neechabhanga Rajyoga. From Chandra Lagna (Moon Rashi), the 9th lord Mars with exalted 10th and Lagna lord Jupiter in 5th house alongwith 4th and 7th lord Mercury and 6th lord Sun is indicative of strong Rajyoga. The prince is currently running Mercury Mahadasha and Rahu antardasha. The subsequent antardasha periods of Jupiter and Ketu (being in Scorpio in Mars Sign) Mahadasha starting in 2015 strongly suggests a very powerful position in Nepal political scene for the young Prince. Prachanda‘s reading of Nepalese future may not be without merit after all. It coincides with our earlier prediction of strong likelihood of return of Royalty to Nepal with Prince Hridayendra at the top. 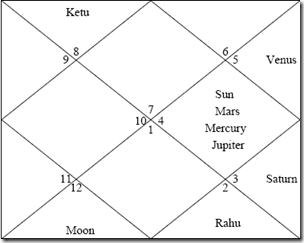 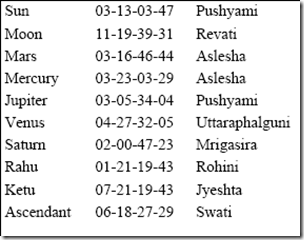