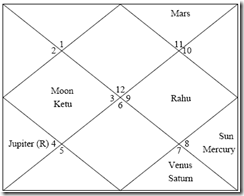 Prachanda (Pushpa Kamal Dahal), the  caretaker Prime Minister of Nepal and Maoist chairman left his official residence  23rd May  morning as Mars entered Aries, even though he had officially resigned on 4th of May. Prachanda was elected as Prime Minister by the Constituent Assembly on 15 August 2008 and was sworn in on 18 August 2008. As we noted in our last blog, Vedic Astrology, Nepal Republic Fate and Royal Family , the king was deposed on 28th May 2008.

Here we analyze the Vedic astrology behind the rise to power of Prachanda, this born Brahmin and later Maoist turned leader of Nepal. This example illustrates how Vedic Astrology gives us a very detailed insight of the events unfolding in Nepal.

Prachanda was born on 11th December 1954 as Chhabilal Dahal. However, while studying in the Primary School, a teacher praised his cherubic looks and renamed him Pushpa Kamal – meaning as radiant as the lotus. He was the oldest of the eight siblings. Based on his detailed published biography and the life events, his ascendant or lagna is Pisces as shown in the horoscope here. This corresponds to his birth time around 12:30 to 2:30 PM Nepal time.

He was married in a traditional Brahmin family early in Jupiter mahadasha and Mercury antardasha at the age of 15, mercury being the lord of 7th and Jupiter exalted in 5th. His joining the the underground Communist Party of Nepal in 1981 corresponds to onset of Saturn Mahadasha. Note Saturn position exalted in eighth, aspecting Rahu in 10th house.

Association of exalted Saturn with Rahu in Sagittarius, the rashi of exalted Jupiter and Saturn’s aspect on Jupiter are indicative of extended underground life and that of an idealogue. Even though born and living in a traditional brahmin family, the communist philosophical utterings and inclination come from Rahu’s powerful position and Mars in Aquarius. Spectacular rise to power comes from exalted Saturn associated with Venus in Libra. And the downfall from power comes from rahu’s position in 10th aspected by Saturn in eighth. Presence of Mercury in 9th brought him to long distance travel to US in sun antara of mercury mahadasha. It is a powerful horoscope to be analyzed further when we discuss Nepal in future blogs.