Indonesia goes to the polls on July 8, 2009 with president Susilo Bambang Yudhoyono apparently well ahead of Megawati Sukarnoputri and a third candidate, Vice President Jusuf Kalla, in most opinion polls. The Presidential election comes one day after the lunar eclipse of July 7th and the first o

ne in the Triple eclipse of July-August 2009. The planetary positions at the time of July eclipses are given in our blog Astrology July 2009 Eclipse. The eclipse points for the lunar eclipse are 21 degrees Sagittarius Moon and 21 degrees Gemini Sun. The solar eclipse point is five degree Cancer.The planetary positions for the August 6th eclipses are given in the table here. The eclipse point in August 6th eclipse is nineteen degrees capricorn moon and nineteen degrees cancer Sun. Since fifty percent of votes are required for a new president and vice-president to be elected, there is likelihood of two rounds of elections in Indonesia spread over July-August 2009.

Indonesia independence horoscope is shown here. Note three planets in Capricorn. These are Ascendant and Sixth  Lord Venus, Second and Fifth lord Mercury and eleventh and eighth lord Jupiter. The chart has Moon Mahadasha running currently. These planets are all within five degree orb of eclipse point or its opposition of Triple eclipses. Also natal saturn in Leo in fourth house will be in conjunction with transit Saturn soon. This suggests Indonesian political situation is to undergo major changes soon perhaps with Saturn transit in virgo in September 2009 and Mars transit of eclipse points in September-October 2009.

The available horoscope of Megawati from Internet is shown here. While ascendant accuracy cannot be verified, we observe that several of her natal planets are along Cancer-Capricorn axis close to eclipse orb points. Eclipse point are energy junctions and the planets in a horoscope in conjunction with or aspecting the eclipse point are eclipse significators. Natal Saturn, Mars, Sun, Mercury and Moon are along the Cancer-Capricorn axis clustered around eclipse points of July 22nd and August 6th eclipses. Based on these observations, we believe the election will go to second round and may bestow victory over Megawati, a prediction  made in the absence of horoscopes of other candidates. 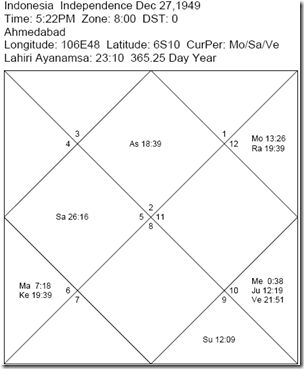 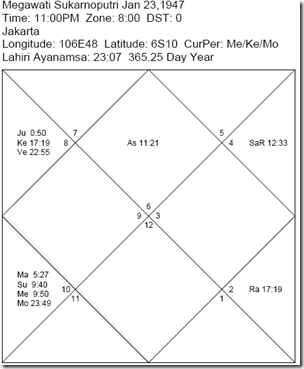