Triple Eclipse of July 2009 consist of the Lunar Eclipse of (Chandra Grahan) July 7, 2009, followed by a total solar eclipse (Surya Grahan) on July 22, 2009 and another lunar eclipse on August 6, 2009. The planetary positions at the time of July eclipses are given in our blog Astrology July 2009 Eclipse. The eclipse points for the lunar eclipse are 21 degrees Sagittarius Moon and 21 degrees Gemini  Sun. The solar eclipse point is five degree Cancer. Eclipse point are energy junctions and the planets in a horoscope in conjunction with or aspecting the eclipse point are eclipse significators. We analyze the influence of these celestial triple eclipse energy junctions in the horoscope of Philippines.

On July 4, 1946, United States granted Philippines independence. The horoscope on 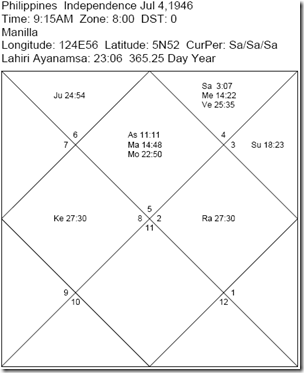 that in Manilla is shown here. Based on this chart, moon is in Poorvaphalguni nakshatra ruled by Venus. The current mahadasha of Philippines is Saturn Mahadasha Saturn Antardasha. Saturn is the lord of 6th and 7th house occupying the 12th house in Punarvasu nakshatra ruled by Jupiter. The lunar eclipse points falls within three degree orb of natal sun and the solar eclipse point falls within two degrees of natal Saturn. Sun is the lagna lord representing Government and the lunar eclipse will initiate activities related to changes in present government but it is the solar eclipse point conjunction with natal saturn that will bring about major political changes. In addition, Saturn transit in Virgo in September 2009 and subequent mars transit over eclipse point all suggest a major political change in Philippines in the making.

It is also worthwhile to note that the solar eclipse point falls on the natal Saturn of Gloria Macapagal Arroyo,  present President of Philippines who came to power on January 20 2001. Arroyo herself is running Saturn Mahadasha born on April 5, 1947. The eclipse point also falls on the natal Jupiter of ousted President Joseph Ejercito Estrada born on April 19, 1937 and about to begin his auspicious Jupiter Mahadasha.