Gordon Brown became Prime Minister of United Kingdom on 27 June 2007 after Tony Blair. His own popularity is at a historic low. Brown pledges to do better . But is he going to survive as Prime Minister? We seek answers from Indian Astrology.

Gordon Brown was born in Glasgow on 20th February, 1951 at 8:40 AM. Based on this time, the Vedic horoscope is given here. 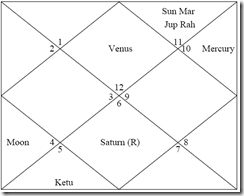 He is born in Satabhisha nakshatra with Rahu mahadasha at birth. He became member of British Parliament in the mahadasha of Venus and antardasha of Jupiter in 1983. Note Venus is in lagna exalted and Jupiter is the 10th lord. He was married on 3rd August 2000 in Mahadasha of Moon and Jupiter Antardasha. During Mars Mahadasha he became the Prime Minister. Mars 9th lord is with Jupiter, the 10th Lord, Sun and Rahu in 12th house.  The Rajyoga combination in 12th house has given him struggle to achieve this highest political position.

He is beginning Saturn Antardasha in Mars Mahadasha starting Oct. 2008 and this period will run till the end of November 2009. Retrograde Saturn in the seventh from lagna and in the eighth house from Mahadasha lord, Mars, is not very beneficial for his Rajyoga and will cause him to struggle in  his present position.